Cycling Romania – Lost in rocky roads and passing by Buzescu

The second part of our bicycles adventures in Romania. After having met the peculiar gypsy community of Valea Lui Stan we cycle towards the south, to the even more peculiar town of Buzescu.

We stop to eat in Brezoi, Omleta cu branza (Omelette with cheese). And head to Pitesti, the next small town on our route. After about twenty kilometers we finally move away from the “death’s road” along the river. We pass a bridge on the Alt river, this new road has much less traffic, passing through little hamlets.

At some point, when we least expect it, the asphalt ends and begins a dirt climb with a 20% slope. Or at least, it starts as dirt, but it soon becomes just stones. Big stones.

The trusty GPS says us that the road is the right one and we, after years of teasing motorists who do just everything the navigator says them, just trust it blindly. We hope that’s just how it often was in these previous days: road works after a which the asphalt will resume. But we’re wrong, terribly wrong.

There’s no choice but to push and it is a tremendous hard work. It looks like a nightmare. We do around ten kilometers like this. About 6 hours. Even on those short stretches of downhill or flat, there’s no way to cycle, the rocks are just too big. We meet people every now and then but no one says “where the hell are you going?”.

After hours of hell, a little old lady tells us that we’re almost back to the asphalt, we “only” need to cross the next mountain. We want to die.

After yet another vertical climb we stop, exhausted, and assemble the tent along the “road”. The forest on our sides is too steep to enter. We cook pasta and go to sleep, keeping on asking ourselves why are we 650 meters above sea level, and hoping that tomorrow this hell will end soon.

We wake up still in the rocky hell. We realize we slept so close to the road that we could’ve easily been run over by a car. Fortunately, no cars venture up here.

At least for once is no raining, it would’ve been a quagmire otherwise. We drag the bikes for a few more kilometers and then it comes, like a mirage in the desert, beautiful, smooth, black asphalt.

The weather is beautiful, we roll along a very pretty river to Curtea de Arges where we take a room just before the storm comes. In the room, there is a TV where everything is green.

We woke up pretty rested. Let’s start, the road is fairly flat. A yellow car stops to say to Daniele that in a couple of kilometers we’ll pass through a very dangerous gypsy village, to not leave me behind, to don’t stop and talk to anybody and to be careful. This is the average idea the Romanian have about the Roma people.

Eventually, we get there, there are four houses. Everyone speaks Italian and greet us. The problem, as always is not the Rom, but the stray dogs. We’re approached by five big ones, and that is scary. Luckily a “dangerous” Mrs. Roma comes to fetch them and it all ends well.

Aside from this episode, it’s just a typical bicycle touring day in Romania: villages, countryside, and horses.

Here even the hardware stores sell beer. A pint of draft beer costs about 2Lei (40 cents). That’s how we end the day.

A glimpse of Buzescu

When we wake up there is a cow in front of the tent. All right. While dismantling the camp, the owner of the cow comes, an old woman about 140cm “tall”, wearing a kerchief on her head and a beautiful toothless smile. She greets us and unties the cow.

We’re going to fill the water and rinse off in the fountain near the village. Two guys ask us where are we going, they believe there is an ocean to cross between here and China.

Along the way we stop to eat under a plastic bus shelter, there’s a little black dog with not many days left to live. We give it some bread, water, and canned meat.

We’re very close to Buzescu, where we should film the second part of our Romanian reportage. Buzescu is a small town with less than 10,000 inhabitants. It has three roads, the side ones where the lowly houses are, and the main one, where each the competition for the fanciest villa takes place.

Before the bridge over the river that separates us from the village we can already see them in the distance, Buzescu’s odd palaces, towering over the surrounding countryside. 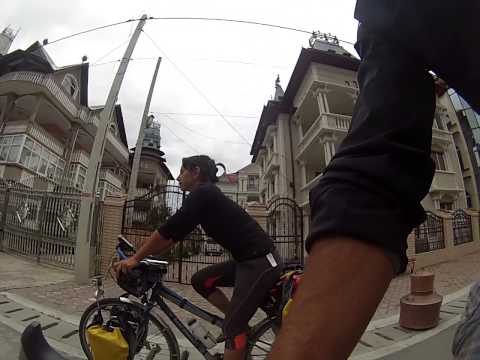 We arrive in town, also here we have no contact and filming is not going to be easy. Moreover, people here are way less friendly than in Valea Lui Stan.

A photographer from National Geographics came here a few years ago and wrote an article relating the rich villa to illegal businesses: gambling, prostitution, drugs. The local people didn’t like that much.

We meet a guy who speaks perfect Italian, he was born here but lived in Terni since it’s early childhood. We go for a walk together while he explains to us some stuff about the place:

The guy’s name is Marco, he’s here to visit his mother who’s dying. We visit his house, very humble, there’s not even running water or glass on the windows. Instead, there’s a beautiful horse in a stable. You’re nobody without a horse here in Romania.

We spend some time together until it almost gets dark, we say goodbye and head for Alexandria, to find a camping spot for the night. Again we didn’t film or take almost any picture, the action-cam video up there is the only footage we got, being cyclo-reporter in Romania is harder than we thought. 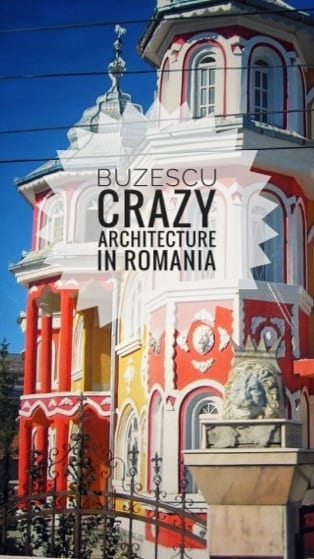