History and modern practice of Kecak, the “monkey chant” of Bali

Where to see Kecak traditional show in Bali. Its origins and meanings: how a sacred ritual turned into a profane performance

Indonesia is a cradle of cultures, a cosmos where each island is a separated planet, interconnected with the others but totally unique in its deepest cultural expressions, religious beliefs, and languages. Among the 17,504 (maybe) Indonesian islands, Bali is certainly the most famous, one of the most visited places in the world.

Although many of the tourists come here for the beaches, the parties, and the scenery, since at least 2 centuries Java and Bali are visited and studied by scholars from all around the world for their unique cultures and art forms, traditional dances, theater forms, music, and rituals.

The shadow puppet show Wayang Kulit, the “eyes dance” at the sound of Gamelan orchestra usually known as Legong, might be the most familiar, but there are literally hundreds of performing-arts in Bali. Among these is a very peculiar art form named Kecak.

How I got to know about Kecak

I first came across Kecak through the 1992’s movie Baraka, I own a lot to this Ron Fricke’s film, my fascination for otherly cultures, my will to explore and experience the world, although already present in me, got a strong boost from it.

The Kecak scene of Baraka stunned me so heavily that I promised myself I will get to witness it in person, soon or later. And I did, getting to see, moreover, the first woman’s Kecak group in history.

Ten bamboo torches enlight the court of the temple, a group of women of all ages, maybe 50 or 70 of them, march in and form a circle. They are simply dressed, modest sarong tied around the waist by a scarf, a red hybiscus flower on the right ear, a white one on the left. And suddenly there’s an explosion of sound, a complex vocal polyrhythm without any tone, a hail storm of voices. Hands move frantically, everything follows the command of a choir mistress.

The origins of Kecak

Balinese people are mostly Hindu, although Balinese Hinduism widely differs from the Indian one. Being isolated from contacts with India it’s artistic and ritual expressions have been strongly influenced by Javanese culture.

Although the form Kecak has nowadays dates back just to the 1930s (we’ll see that later), this ritual form of chant and dance is much more atavic and rooted in Balinese ancestral culture.

The musical accompaniment of gamelan mulut (mouth gamelan), or the cak chorus, can indeed be found in several Balinese rituals involving the state of trance of the performers, such as the tari sang hyang, or “dance of the heavenly goddess”.

In this ritual, dancers were possessed by gods, thus chasing away the evil spirits, culprits of ominous happening. The tari sang hyang is a very holy rite, performed in the inner area of the temple, where only “priests” or holy persons are allowed.

Kecak against deadly diseases, the story of Bona village

It’s probably in the light of this tradition that we can understand this story, told by the Jakarta Post, about a village called Bona in the early years of the XX century.

Blighted annually by a deadly pox that washed over the village, with monsoons bringing storms in the month of November, Bona’s villagers knew every family would lose at least one member to the disease.

People were ill, they were vomiting, they had diarrhea. Things worsened until the sick were vomiting blood and had fevers. A lot of people died, their skin turned black. In one day there could be as many as four funerals, the next five, and on it went, day after day, week after week, year after year.

The temples were all closed. People couldn’t enter, every family had lost someone, and so they were all unclean. No ceremonies were held for the dead, which were so many.

Making enough racket to wake the dead was the only method they could fathom to ward off the deadly disease. One night there was a man who became possessed by the rhythm, not the rhythm of the gong, but of human voices, from that moment, the disease started to ease and the death and the illness stopped.

Bona villagers kept on performing this rite every 6 months until 1970s when dancers began to be invited to perform for tourists. After realizing how this would deprive a holy practice of its meaning, Bona villagers halted the practice altogether, they don’t do the Kecak anymore. 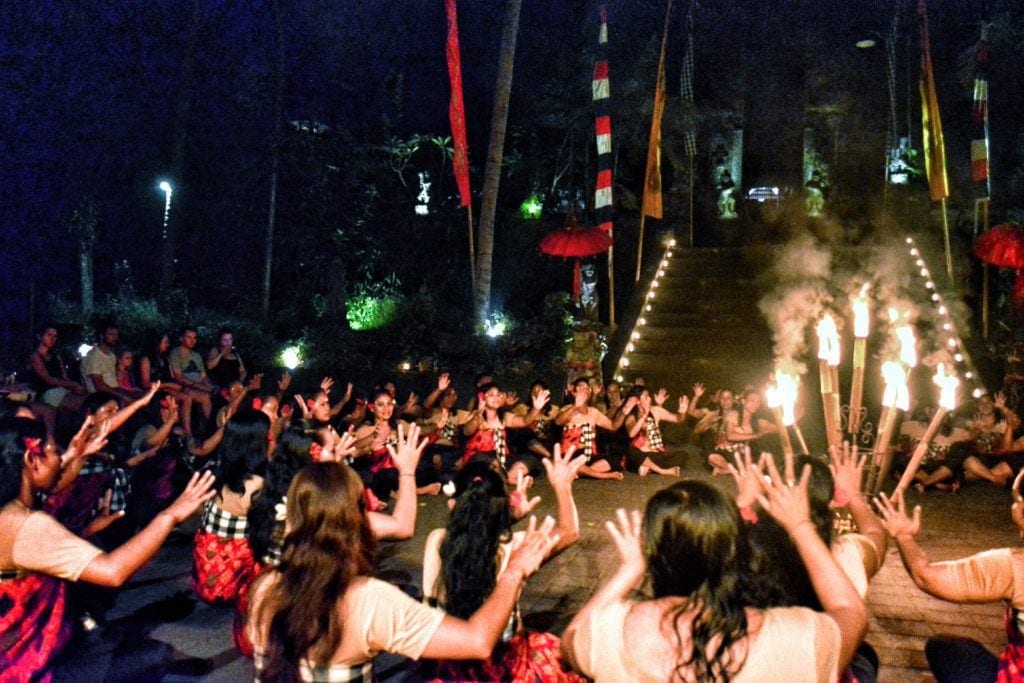 The history of modern Kecak

Than a big bearded man comes in, his dress a piece of art, his expressions funny and terrifing at the same time. He is Ravana, the nemesis of Rama, ready to kidnap the beautiful Sita… but Hanuman, the monkey warrior is ready to fight for his master’s wife

The 30’s were very complex years in the history of Bali. The dutches had taken over the island in 1908, through fear and civilian massacres. The military interventions, however, were followed closely by a coverage of the bloody conquest of the southern part of the island which shocked the West.

The image of the Netherlands as a benevolent and responsible colonial power was seriously affected. The Netherlands, also under criticism for their policies in Java, Sumatra and the eastern island, decided to make amends, and announced the establishment of an “Ethical policy”.

The Dutch in Bali turned into students and protectors of Balinese culture and efforts were made at preserving it as a “living museum” and in 1914, Bali was opened to tourism.

In the meanwhile, following the orientalist fascination generated by the 1900’s universal exposition in Paris, flocks of western artist began to flow to Indonesia. Among them was the German artist Walter Spies.

Spies stumbled upon the Kecak, which was probably already being popularized, and he liked it. Working together with Wayan Limbak, they arranged performances by adding elements of Legong and stories from the Ramayana, organizing tours abroad, thus making the Kecak internationally known.

Nowadays Kecak is pretty much those developed by Spies and Limbak, with the Cak choir accompanying some classic scenes from the Ramayana. Performances last between 60 and 90 minutes and are usually followed by a so-called fire dance, also borrowed from religious rites like the tari sang hyang jaran.

The religious meaning is totally gone, indeed the performance is staged in the most external area of the temple instead of its inner core, a zone that, even though being also consecrated, is meant to host profane activities.

Kecak evolved into something different, and it is extremely interesting to underline the creation of the first all-woman Kecak group in 2004. Kecak was meant as a men’s activity but these ladies broke the rule by setting up an amazing show. We were lucky enough to see their performance, their stubborn dedication and achievements were really touching to me.

Nevertheless, Kecak maintains its charm, sounds make the spectator dizzy, costumes of the main characters are beautifully intricate, firelight and overall atmosphere have a magical aura that is enchanting.

Where to see Kecak in Bali

The town of Ubud, the cultural tourist center of Bali island, is certainly the easiest place to see traditional dance and music performances.

Although it’s true that, while roaming around Bali, it’s highly probable to stumble upon traditional celebrations and rituals that involve many kinds of dances, theater, and music, there’s almost no way to plan that in advance, the only way to see a real Balinese ceremony is to be in the right place at the right time.

In Ubud instead, there are performances every day (except for the Nyepi, the Silent Day) and Kecak is staged at least 3 times per week.

The venues are mostly in Ubud town center, not far from the Royal Palace, while some different activities occur in nearby villages, such as the Jegog (the bamboo Gamelan), for these shows, free transport from Ubud Tourism Office is provided.

Each and every day there are several performances, so that is easy to get to see whatever fancies you most even if your time is short.

The tourist information center, placed near Ubud main crossroad in the north of the town (near the Royal Palace) can provide you with a list of the upcoming shows, with timetables and fees. You can check the schedule online here.

Entry fee for most of the shows is around 7USD, the duration of the shows stays within 90 minutes, they all take place around 7 or 7:30 pm.