The Cinelli Hobootleg is a travel bike with the classic characteristics of a 700cc expedition-friendly beast of burden.

Since its original conception, the Hobo Bootleg underwent fine-tuning for two successive editions of the Tour d’Afrique in 2012 and 2013, before being used by, Italian ultra-cyclists Paola Giannotti to break the Guinness World Record for the fastest crossing of the globe by bicycle in the women category.

Daniele and Simona from BeCycling, who rode through the highest passes of Asia and the deserts of Australia on two Cinelli Hobootleg, kindly provided all the pictures in this blog article (thanks a lot guys!) – Check their Instagram and Facebook pages, serious adventurers!

Have also a look at

How we write our reviews: most of our reviews are based on first-hand long-term use or short-term test by a member of our team. For some new models or build variations, we rely on our experience with similar models and our team's experience in understanding bike geometry and components. 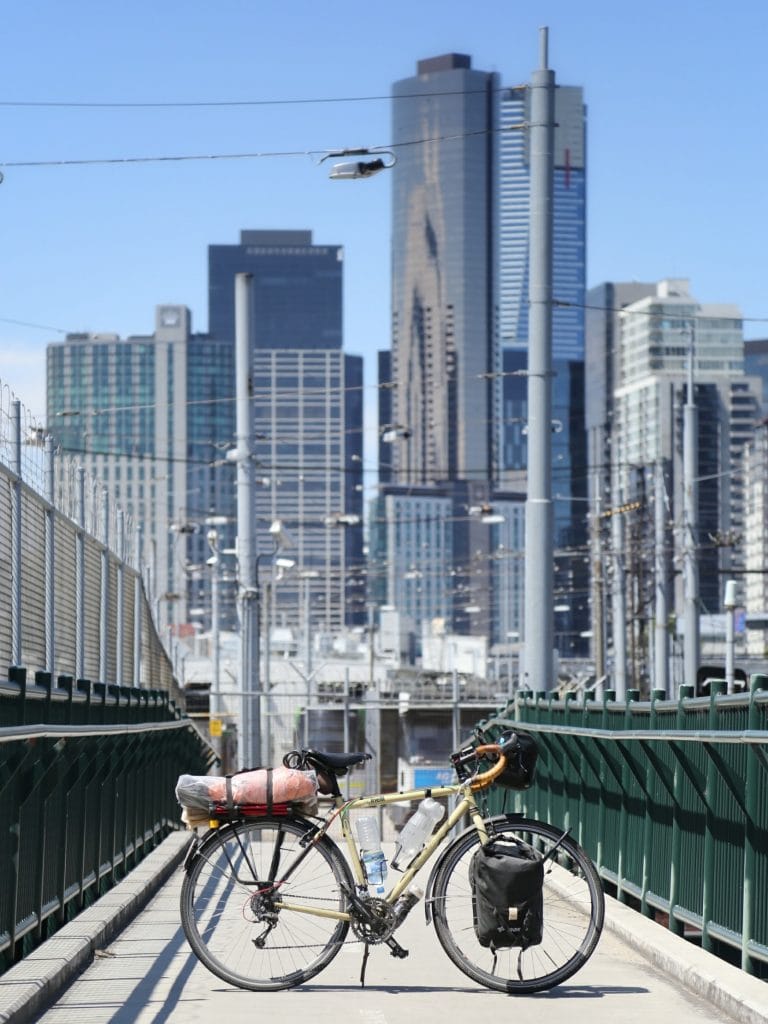 The frame material gives a relatively cushioned feeling, thanks to the natural flexibility of the steel, although the riding is not as comfortable as on a Stanforth Kibo (for example), mostly because of the shorter wheelbase (we’ll talk more about that in the next section – geometry).

Cable routing is external, which is a bit limiting when adding accessories such as child sits (why would you do that), and might scratch the paint off a bit in the long run.

The frameset features 3 water bottle mounts, pretty standard on touring bikes. Being designed for classic bike touring with pannier bags, it lacks the many braze-on and mount points found in more recent bikepacking bikes, like the Cinelli Geo, the 2019 Salsa Fargo, or the Ribble 725.

The Hobootleg can’t accommodate disc-brakes, another “old-fashion” peculiarity given by the belief (still a bit true anyway) that finding disc replacement is too hard in remote areas of the world. V-brakes anyway still work very well for touring.

The fork of this steel touring bike by Cinelli has the usual mounting points for a rear carrier, low-rider front racks, and fenders but it doesn’t feature any extra space for bikepacking cages. Interesting the idea of adding holders on the back fork to carry extra spokes. 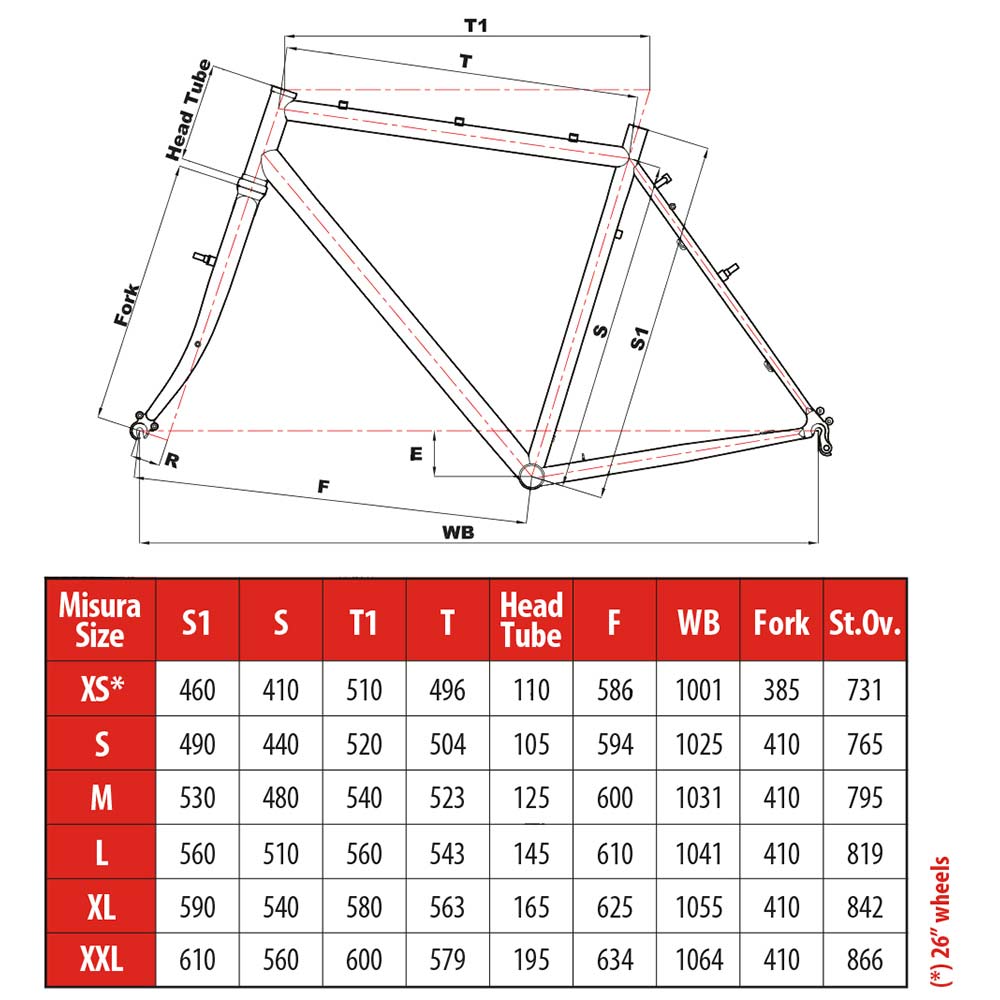 Geometry of the Cinelli Hobootleg

Although, at a first glance, the Cinelli Hobo Bootleg looks very similar to most touring bikes in the market, that’s not completely true, the bike is much more compact (shorter) compared to most of its siblings.

With a chainstay of only 440mm, it is considerably more rigid than, for example, a Stanforth Kibo (467mm), Surly Disk Trucker (460mm), more similar to a Dawes Galaxy or a Kona Sutra (both anyway longer at 445mm).

Its front-center length is also slightly shorter than other touring bikes, making it a bit stiffer but also very reactive. The overall wheelbase of course depends on the size, but is at least 10cm shorter than a Stanforth Pamira.

Together with other characteristics, this geometry design makes the Cinelli Hobootleg well suited for ultra-cycling challenges, probably the experience of Paola Giannotti contributed to that.

Of course that doesn’t mean the Hobo Bootleg is not a well-equipped bike for fully loaded touring, it handles loads very well although maybe not as comfortably as other competitors. It earns points though in speed and handling, and is a pleasure to ride even without loads, doubling as a great commuting bike… definitely not all touring rigs can claim that.

Another little downside of this compact touring bike by Cinelli is the limited toe clearance. It’s common to touch the tire with the point of your shoe when doing sharp turns, that’s a bit limiting for a bike that should handle all terrains.

Two words about the weight of a Cinelli Hobootleg, which is 14.2kg/31lbs (for an M size version). Although not far from the industry standards for steel touring bikes, this is still a bit on the heavier side – 1kg more than a Fuji Touring (as an example).

The weight is related to the thick diameters of the Chromoly Steel tubes, and it means the frame is strong and resilient. One kilogram more doesn’t really make that much difference on a fully loaded bike touring expedition.

Maximum tire clearance is 700cc 42mm/1.65″, honestly I hope they will increase that in the future – a bit narrow for an all-terrain touring bike.

The gearing runs on a very classic 3×9 with an FSA AlphaDrive Trekking Crankset 26/36/48T and Shimano CS-HG400 11/34T, it’s a relatively wide gear range but maybe a 22T in the front would be a viable upgrade if you really want to tackle big mountains on a fully-loaded setup. The 48T anyway gives great maximum speed of about 52km/h, which will appeal to endurance racers.

The components are mostly Shimano, great for worldwide availability. A Deore rear derailleur is an optimal choice for touring and the Sora front derailleur is definitely good enough.

Shifters are Microshift BS-T09 Bar End that can be adjusted to work in friction mode (rather than STI) in case of mechanical problems.

Tektro 992AG Cantilever brakes are old-school but have great stopping power and again are easy to get spare pads for.

The Cinelli Hobootleg comes equipped with Tubus racks with a total payload of 58kg (40kg of load in the rear and 18 kg in the front), 38mm 700cc Vittoria’s Randonneur Trail tires (upgradable to a maximum of 42mm, as already mentioned).

What Are The Best Riding Setups for a Hobootleg Geo?

The Cinelli Hobootleg is a touring bike designed to be used on a classic 4 panniers + handlebar bag setup. It can of course work as a bikepacking bike but it doesn’t have all the mounting points you might need for a loaded setup.

Overall, this is an excellent bike that comes touring-ready out of the box but that’s also really versatile. The finishing is great and the ride is enjoyable.

Cinelli is an Italian bicycle manufacturing company based in Milan, producing mostly road bicycles and components. While 80% percent of Cinelli’s business consists of components, they are renown for having designed and produced some very interesting bikes across the decades of activity.

Cinelli was founded in 1948 by Cino Cinelli (died 20 April 2001), a former professional road racer and president of the Italian Cyclists’ Association. He won Milan–San Remo in 1943, the Giro di Lombardia in 1938, and the Tour of the Apennines in 1937.

Cinelli was the seventh of 10 children, the son of a small landowner near Florence. He became interested in bicycle technology after mechanical failures in races.

They started making stems, bars and frames for other companies. Stems and bars were 80 percent of Cinelli’s own sales. By 1978 they made no more than 700 frames a year.

Have a look at

20 Best Touring Bikes for less than 2,000$
18 Great Touring Bikes for less than 1,000$
15+1 Best Bikepacking Bikes in 2022: Gravel, Touring, Plus, MTB Hardtail, Fat…
The 23 Best Panniers for Touring and Commuting – Compared
Top Handlebar Bags for Bike Touring
Budget Sleeping Pads – A Complete List
Essential Gear For Bike Touring
The Safest Bike Helmets on the Market
Cycling Sunglasses – How to Choose the Right Ones for You