Xinaliq or Khinalug, The Highest Village in Europe – Azerbaijan

Khinalug, spelled Xinaliq in the Azeri language, is the real marvel of Azerbaijan. A remote and ancestral village set above the clouds at 2350msl, among the bare peaks of northern Caucasus.

Xinaliq’s origins go all the way back to the Caucasian Albanian period, some 2000 years ago, and even before that, this is indeed one of the oldest continuously inhabited places in the world, with a history spanning over 5,000 years.

Just like Mestia in Georgia, this village was practically impregnable, and while invader after invader wreaked havoc in the valleys and desert below, this place was kept safe by its remoteness.

Ivanovka – the last kolkhoz of Azerbaijan
Lahic – the reign of the copper king
Baku – where the stinky wind blows
A ferry across the Caspian Sea, from Baku to Aktau
Cycling across the desert of Azerbaijan

Khinalug is situated in the Northeast of Azerbaijan, on the Greater Caucasus. 220km from Baku and only 51km from the nearest town of Quba.

Until 2006, there was no road, and Xinaliq could be basically reached only on horseback or by a very bumpy 4-wheel-drive ride. Still today, the road is not paved and very challenging (not for a Lada of course) but also incredibly scenic.

Khinalug’s remoteness and unique culture can itself be a good reason to travel to Azerbaijan.

Where to Stay in Xinaliq

There are a few guesthouses and a hostel in Xinaliq, they are cheap and can give you a great insight into how people live here. Anyway, if you are like us and prefer camping under the stars, there’s no lack of places where to pitch your tent around the village. Be ready to wake up by roaming cattle though.

Zoroastrianism and Fire Worshipping in Khinalug

Even though the villagers here are allegedly Muslim, many still practice the ancestral Zoroastrian cult. In Khinalig, among the local mosques, there’s indeed a fire-worship tower, called “Atashgah”.

Like its counterpart near Baku, this tower indicates a place where natural gas emissions seep out of the ground, burning eternally without producing any smoke.

Mosques in Xinaliq may not be noticed by the distract eye. They look like large houses and don’t have minarets. The Joma {Friday} mosque is the largest, it was renovated in 1968.

The mosque in the Gamk quarter has a curious feature, a narrow room called “zulmatkhana”, where a wrongdoer would spend time there in order to be relieved of his sin.

This practice is not common in Islam, it might be possibly a belief preserved from an earlier religion. In the Sheikh Shalbuzbaba mosque, make sure to look for the carved wooden column that features older local art.

Today is Daniele’s birthday, who has reached the ripe old age of 32 years. We go to the Baku Avtogazal (bus station) and take a bus to Quba, a city from which there should be some way to reach Kinaliq (or Xinaliq, or Kinalug, or Khinalug, your choice).

The first bus is full so we wait for the second one (there’s a bus every hour), it is small, with no air conditioning and no windows, not a godsend. In addition, the driver is a bit strange, we don’t understand why but he began to argue with one of the passengers.

The road crosses the void, desert to the left and desert to the right, the landscape, a little alien, is really nice. At one point, the driver leaves the main road and takes a very busy alternative one, passengers are quite pissed.

Especially after realizing that the detour was made to load some people in a small town, even though there are no seats on the bus.

Don’t know from where some stools come out and these people are placed in the middle lane of the bus. Can’t breathe anymore. We take four hours to get to Quba, less than two hundred kilometers.

Hitchhiking from Quba to Xinaliq

When we finally arrive at the bus station the city looks a bit desolate. It’s about 18:30, we are told that there are no Marshrutkas (minibus) for Xinaliq, only taxi.

We take a bus to get to the bazaar but there is only Lada taxis (private cars) and they want 40 euro. Consequently hitchhiking.

We cross the city on foot. It’s not really anything special as opposed to what we had heard. The hitchhiking starts quite well. First, we’re picked up by a car for about ten kilometers, we arrive in a wooded area, very nice.

Well, not just desert then, even in Azerbaijan there are trees. In the midst of this forest, there are tables scattered everywhere, areas equipped for picnics and restaurants.

The second car takes us a little further, but we are still 40 kilometers away from the ultimate goal. The third car is a beat-up Lada 4×4, we get on, we’re on a steep slope and the car almost can’t restart.

The driver is a guy about 35 years old who speaks in Russian, we understand that he’s going to meet some friends somewhere and we can pitch the tent there. We arrive at one of these places with gazebos and tables, where the friends are.

One of them is celebrating his birthday too, and so Daniele finds a surprise birthday party. We eat and drink for free and in good company. One of them brought a keyboard so we also have live music!

We put the tent in the grove and tomorrow another day of hitchhiking to get to an altitude of 2400 meters.

We wake up a quite stoned. A guy who walks the cows shakes the tent. Half asleep I think it is a bear. Ok, it’s time to go. We get a lift from a Martckroutka full of women going to take a jaunt.

They eat chips and toss bags from the window, but then admire the beautiful landscape. Around us, the mountains are starting to get more and more high and vertical.

The all women’s van (except of course the driver) stops at a “do shot a photo” point and the tour is over. From there we walk a bit, there are considerable ascents and the few passing jeeps are almost all full.

Near a fountain, we spot an old military jeep stopped to let the engine breathe. They go up to about twenty kilometers from Xinaliq and luckily the give us a lift. The back seats are not there, removed to carry more cargo probably. Only two benches, we grab bars to hold onto. The landscape gets really wonderful. We enter into a kind of canyon with vertical walls. And also the road grows vertical.

Behind us a Lada, old and stoic, at least five people on board and two huge speakers (for music) on the roof! We’re sure they’ll make it, Ladas can do everything. And with only 4 gears.

The old military jeep leaves us and less than a minute later the umpteenth Lada 4×4, this time the new model, takes us on. Onboard, there are already 4 people but somehow we manage to get into. They go to Xinaliq!

We arrive at the town center where a large gazebo will hosts a wedding banquet. The only shop in town is closed, it’s Sunday, we hope in vain for someone to invite us to the banquet but nothing.

After an hour or so there comes a gentleman to open the shop, so we can buy some food.

The town is spread over all of our heads. The houses are made of river stone and the roofs are flat so that roofs of the houses below often serve as terraces and walkways for the houses above.

There is no concrete or any other materials, besides some metal sheets, arrived just a few years ago in 2006, when the road was completed.

We move towards the valley to find a spot for the tent and be able to wander around without weights. At the end of the town starts a dirt road, the entrance to the Şahdağ National Park, but there is not a living soul.

We put the tent in the meadow along the river and go back to the village. This time we climb among the narrow streets that lead to the top. The village is very lively and it seems all of its 2000 dwellers are around.

All around it’s full of walls made of tiles of dried cow dung and straw. They serve as fuel to warm in the cold winter.

The view from the top of the village is truly stunning, and it is amazing to think that for thousands of years the people of this village have been going well, just using what this remote piece of land, surrounded by impassable mountains, gave them.

The river providing water and stones for the houses. Cows and sheep for food, clothes, and heating. No crops except for some barley, too cold, and not good soil.

Since 2006, with the arrival of the road, a little bit (but very little) has changed. Some roofs of the new houses are made of metal. And then, of course, there are the cars.

From the top of the village, we take a back-road, or rather a path on a bare mountain that leads to one of the many cemeteries.

The mysterious graves of Khinalug

South of the village, visible from the highest spots, is an area of land where the ancestral cemeteries are, many tombs, very old, no archaeologist has dug here so nobody knows.

Some tombstones are just stone plates planted in the ground, others have inscriptions in ancient Turkish or in other languages.

The oldest one might be Neolithic. Like Lahic, also, Xinaliq is part of the ancient Albanian tribes, so they also have their own language here.

Back in town we meet two Italians who arrived there with a rental car, and so tomorrow we have the lift back to Baku. The night is astounding, full moon coming out from back the village.

Our Video About Khinalug 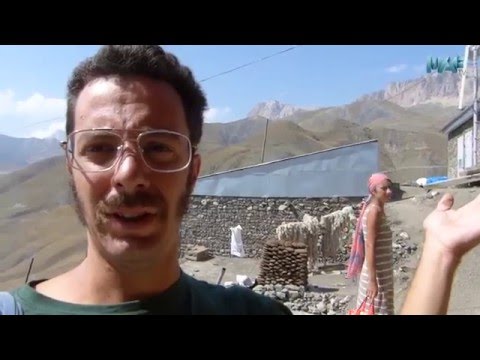