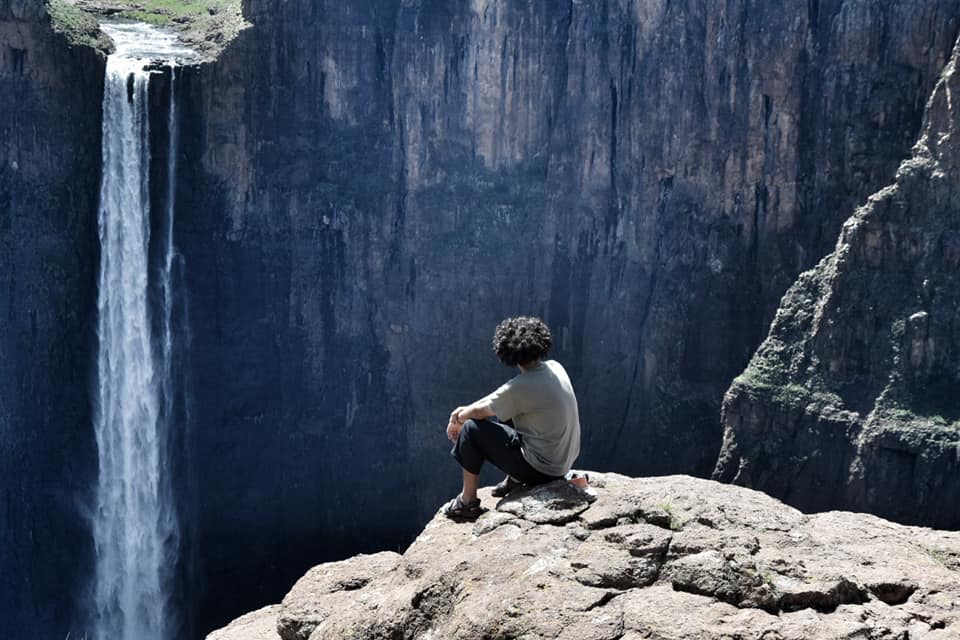 Maletsunyane Falls, among the highest waterfalls in Africa
one of the highlights of Lesotho, the Mountain Kingdom
+ some words about Semonkong Lodge

The Maletsunyane waterfall is located a few kilometers from the village of Semenkong, in Lesotho, a mountainous and enclave country within South Africa. Lesotho is the only state in the world completely above 1000 meters, to be precise 80% it is located above 1800 meters.

With its 192 meters (630 feet), it is one of the most impressive waterfalls in Africa and the among the highest single-drop falls, it plunges into the beautiful gorge below offering a breathtaking view. If you are brave enough, you can tackle the abseiling. At 204 meters, this is the longest rope descent in the world, entered into the Guinness World Records in October 2005.

We visited Maletsunyane during our bike trip through Lesotho. Semonkong, the city near the waterfall, is located on the recently paved A5 road that connects the capital Maseru to Qachas Nek, one of the many borders with South Africa, in the south-eastern part of the country.

Going around South Africa? Have a look at:

Semonkong and the waterfall of Maletsunyane are found along the recently paved A5 route. This new traffic artery cuts Lesotho in half, going from Maseru to the hamlet of Seforong on the Orange River (Senqu River), where it connects to the A4 (Quthing – Qachas Nek).

The A5 road offers marvelous landscapes in all its length, there are no boring points and, indeed, the landscape seems to change at every turn.

Of course, if you are, like us, on a bicycle it is not an easy ride, Lesotho is called Kingdom in the Sky because of its high mountains and the tiring up and downs are daily routines here. But at least, unlike so many roads in Lesotho, this one is paved and will make the effort much more bearable.

Even by car, some sections of this route are so steep to be seriously demanding on your engine. Keep it in mind if you have a small cc car with a lot of loads.

Check more about other highlights along the A5 on our Lesotho itinerary.

The town of Semenkong, about 5 kilometers from the Maletsunyane waterfall, lays 2,275 meters above sea level and has about 8,000 inhabitants.

The name Semonkong means “place of smoke”, which apparently comes from the falls around (there’s not just Metesunyane), it historically served as a secret hideout for outlaws during the Gun War in the 19th century.

Walking along the road that leads to the only (!?) Lodge (which we will describe below) you will pass through a lively market where, anyway, you will not find much to eat. The market is mostly made by simple tin stalls, alleys are dirt so can be muddy or dusty according to the weather.

Look for freshly baked local bread, some frankfurters and fried batter cakes. There is also a shop with the ubiquitous Chinese selling sodas, rice, instant noodles, maybe bananas and apples, and some canned food.

The Semonkong market though is still a nice opportunity to get a taste of local life or if like us, you travel by bike and had experienced already enough local life, you can cross the area quickly and take refuge in the nearby campsite where nobody will ask you for money and candy.

If you want to drink a beer, buy it at the market, at the Lodge they’ll make you pay double. There are several local bars in the town center and also a few eateries where you might find some chicken and rice.

Where to sleep near Maletsunyane Falls 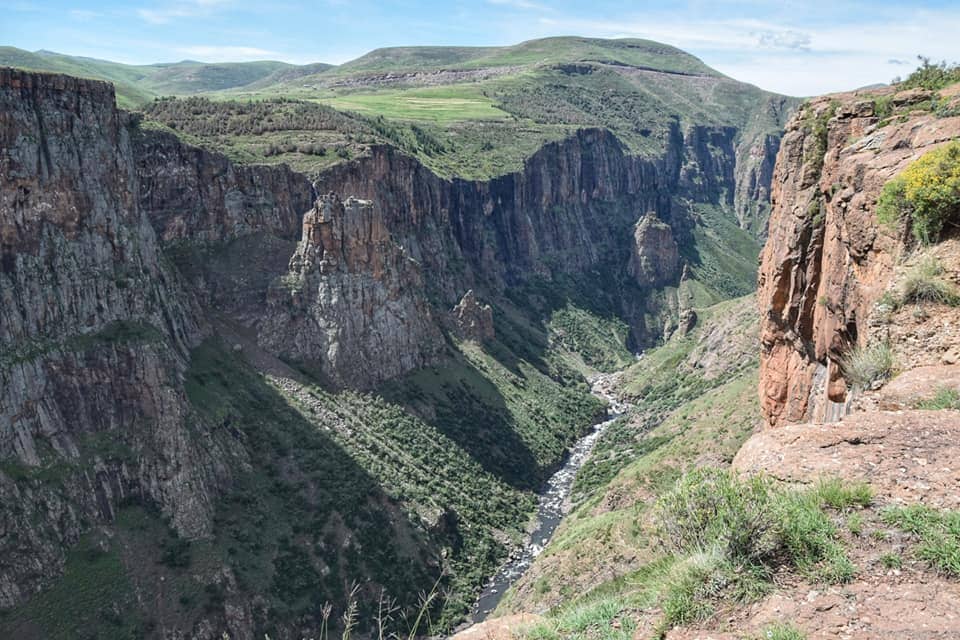 The only accommodation option in Semonkong is the Semonkong Lodge, a quite big resort establishment runt by white expats. The place is cozy and well-equipped (considering that you are in Lesotho).

Inside the lodge, there is a restaurant that is a bit expensive but good and a bar with a pool table. The campsite is a nice flat area on the river, there is a sheltered table equipped with a faint but decent light until 10 pm, there is, of course, the ubiquitous barbecue grills (braai in Afrikaans). The showers are hot and the tent spaces are equipped with an electric socket. Electricity though is available only from 5 pm to 10 pm, provided by a diesel generator.

Besides camping, other accommodation options are the en-suite rondavels (traditional-style roundhouses), and two bunk-beds dorms (6 persons, 10 persons), those last ones are often in high demand so book in advance.

The place is very touristy, especially during summer weekends so the rooms could be full. The Semenkong Lodge organizes various types of activities including horse riding and 4×4 excursions, but they are mostly famous for the Malatsunyane Abseiling.

This means going down the whole height of the falls attached to a rope, of course not for the faint hearted. If you’re considering this, please keep in mind that it can be dangerous, they’ll let you sign a form where they decline rensponsability if something happens, so think twice.

At particular times of the year such as the King’s birthday on July 17th (yes, Lesotho has a King) or Independence Day on October 4th, horse races are organized with cash winnings, one of the most popular sports by locals.

If you don’t want to sleep at the Semenkong Lodge you can freely camp near the waterfall or ask permission from the inhabitants of the nearby village leaving a donation.

How to get to Maletsunyane Falls from Semonkong

There are two ways to reach the waterfall:

.The “official” road of about 4 or 5 kilometers easily accessible also by car will take you a few hundred meters from the main vantage point in front of Maletsunyane.

From Port Elizabeth to Lesotho – Crossing the Eastern Cape by Bike

.Otherwise, from the Lodge there is an unmarked but not very difficult path to follow that will also take you to the waterfall in about 4 kilometers, the hike is flat and very easy, although many points could be muddy and should be bypassed.

The trail will take you through a typical village and meet the equally ubiquitous Basotho shepherds with their sheep or cows and their heavy shawls regardless of outside temperatures.

The Semenkong Lodge offers also trips to the waterfall on horseback and local guides for the hike, those second ones are not really needed since the road is pretty obvious.

The falls of Maletsunyane are often referred to as the tallest single-drop waterfalls in Africa, that’s not true, although it’s not completely clear who owns this record, this doesn’t really matter.

The Maletesunyane waterfall, although much smaller than the Tugela Waterfalls in the South African side of the Draakensberg, is impressive and totally worth visiting, one of the highlights of Lesotho, watching this power of nature plunging vertically with elegance is a hypnotic display of majesty that kept us enchanted for quite a while.

The Maletsunyane falls are formed on the homonymous Maletsunyane river, one of the tributaries of the Orange (Senqu) River, the main life artery of South Africa. They abruptly fall over the edge of a Triassic – Jurassic basalt, which would’ve been worth a visit itself, even without the falls.

One of those can be seen while approaching the Maletsunyane viewpoint from the village trail, while another one is spotted from the A5 road, just a few km south of Semonkong (you’ll notice an informal parking spot where the road reaches its highest point).

There’s also a trail that goes down the gorge and follows the river deep into the canyon, you can see it from the top. It doesn’t look easy (especially getting down seemed quite dangerous) or maintained at all, we haven’t seen anyone on it, not even the ubiquitous herders, which usually venture in quite some remote trails. If you happen to hike this trail, we would love to hear from you in the comments.

Going around South Africa? Have a look at: