From the Hanseatic League to Soviet times

Tallinn is not just a historical city, it is a mix of ancient, modern and what remains of the Soviet occupation. A unique city worth spending at least 2 or 3 days, Tallinn is a real gem of northern Europe, probably the most beautiful and interesting city in the Baltic Sea.

The Old Town of Tallinn, the Estonian capital, is a UNESCO World Heritage Site, its beauty is impressive and is so well preserved that you really feel like you are going back to the days of Hanseatic League.

Among the things not to be missed there are surely the Seaplane Harbor, the Telliskivi Creative City, and Linnahall and many more, here is a list of things to see in Tallinn in 2 or 3 days.

Before we start digging here is some piece of advice:

Tallinn is a relatively small city, to explore it at its best a great option is to rent a bike, it is possible to have advantageous offers here: Tallinn Bike Rentals

Want to travel the whole of Estonia deeply, read our guide and suggested itineraries
And why not take a ferry from Tallinn to Helsinki, Finland
Here our guide about cycling in Finland with itineraries and tips

Seeing Tallinn in a weekend

Visiting the Estonian capital in a weekend is definitely doable, the city has many attractions but it’s small enough to be explored in such a short time, maybe even including a short day-trip to a nearby point of interest.

There are low-cost flights to Tallinn from many European cities, check out the best deals here.

Two days pass by fast, it’s best to focus on the main attractions if it’s your first time in Tallinn.

Three days are optimal for visiting Tallinn and its surroundings. Focus on the main attractions for the first two days

Things to see in Tallinn in 2 or 3 days

This fantastic Maritime Museum is located not far from the center of Tallinn and was built in a renovated old hangar.

The building is truly amazing, inside there is a permanent exhibition on the naval history of Estonia and a real submarine, the Lembit, in which you can enter and get a very realistic idea of what life was like inside.

The museum also contains a full-size replica of a British seaplane, as well as a host of other related historical accessories, unique to the region.

Outside the museum are anchored a series of ships which you can visit, including the Suur Töll, the largest steam-powered icebreaker in the world, you can also visit the bottom of the ship to understand how it worked.

For us, it was one of the nicest things seen on our bike trip in Europe so we highly recommend going there, take into account that you will need 2 or 3 hours for the visit, even if the tickets are sold up to 30 minutes before closing.

It is the largest creative center in Estonia and is about 15 minutes walk from the historic center. It consists of 10 buildings housing more than 200 companies and organizations, has a relaxed and bohemian atmosphere. Each individual company is free to design its own space as it sees fit.

It is an excellent opportunity to get a taste of the local cultural life and hang out in places far from the masses of tourist buses that roam the narrow streets of the center. Telliskivi is located near the railway station and has given a new face to the ugly abandoned Soviet factories that surround the area.

Some of the street art here is really interesting, we especially liked the older paintings… much more interesting to us than the more “hipster” new style.

If you do not want to walk or cycle you can reach this district with trams number 1 and 2 from the center, the bus stop is called Telliskivi. Telliskivi is an ideal place to spend the evening hours after a long day at the museum.

Linnahall is an imposing Soviet relic, built to house the Moscow Summer Olympics in 1980. The Linnahall of Estonia now stands as an imposing concrete ghastly monster. Inside, an impressive 5,000-seat amphitheater was commissioned by the Soviet Union to show the world its grandeur.

The building was built in a very short time and, no longer serving anything after the Olympics, it was left to deteriorate. Going up the outside steps you will have a nice view of the sea and the old city. Only the external part can be accessed.

Locals hang out here for skating, playing music, and other activities. A nice place to stop by for a quick visit.

It is a medieval tower from which you can access a series of underground tunnels. Built in the second half of the fifteenth century it was then expanded in the eighteenth century with these tunnels that served to give shelter to men and ammunition.

It came out handy during the First World War and saved many people during World War II bombings. Later, during the Cold War, the tunnels were equipped with what was needed to resist a possible nuclear attack.

Since 2005 it is a museum that can be visited by appointment only.

Opening Times: from January to April from 10 to 17, on Thursdays until 20 – from May to September every day from 9 to 18

To book the visit, find the contacts here.

This old Tallinn house is famous because of a legend, apparently the Devil’s wedding was celebrated here. The owner, in fact, died after renting a room to a mysterious couple and the last thing he said was that he had seen the Devil marrying a young woman.

An off the beaten path place to visit if you like ghost stories and mysteries. A good place where to spend an unsettling night.

Fees and how to visit: you can see it from the outside or decide to spend the night there, here prices and availabilities.

The Orthodox Cathedral of Tallinn dates back to the late nineteenth century, during the Soviet occupation was declared a non-religious building and left to its fate.

Since 1991, following the collapse of the Soviet Union, this beautiful church has been carefully restored. Inside there are 3 altars and the whole structure is beautifully decorated.

Tallinn’s Toompea Castle is also home to the Estonian Parliament, located in the historic city. First built in wood between the tenth and eleventh centuries, it underwent several modifications and restorations that gave it its present appearance.

For 800 years it has been the center of power, even when Estonia was dominated by foreign forces. You can visit it with free guided tours.

Timetable: inquire at the entrance for tours organized in different languages

At the time of its construction, the beginning of the seventeenth century, this was one of the tallest buildings in the world. Its gothic bell tower, visible from many points in the city, measured between 115 and 159 meters (there are conflicting opinions among historians).

However, if you want to climb to the top of the bell tower to look over Tallinn from above you have to climb 232 steps.

Hours: from April to June and from September to October every day from 10 to 18 – July and August from 10 to 20

Ticket: entrance to the church is free, to get on the tower the cost is 3 € for adults and 1 € for children. If you have the Tallinn Card it’s all free. 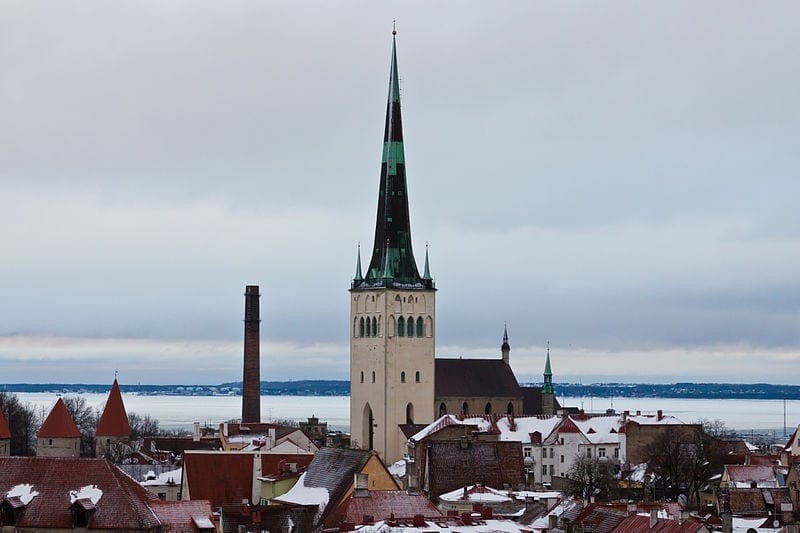 It is one of the most characteristic views of the Old Town of Tallinn. What makes this alley particularly interesting is that it houses a collection of artisanal workshops where artists use traditional methods to create and sell glassware, hats, quilts, ceramics, jewelry, hand-painted silk, and other items.

The workshops are housed in the small rooms of the seventeenth and seventeenth century on the south side of the road and are set up in an open-fashion studio so visitors can watch the artists at work, whether it is blowing glass, weaving or making pottery.

This modern building, opened in 2006, houses the library and a collection of Estonian art from the 1800s to the collapse of the Soviet Union. Performances of various kinds, including international ones, are periodically organized.

There are various types of Tallinn Cards that can be purchased online or at retailers in the city. The costs range from € 24 and up depending on the validity of the card: 24, 48 or 72 hours and the attractions included.

With the Tallinn Card, you can also travel free on public transport, have free admission to more than 40 museums and attractions (here the complete list), and at the Tallinn City Tour by bus. You can buy it here.

The Tallinn card is very convenient for those visiting on a weekend, whether it will be a long 3 days or a short two.

check the Best hotels in Tallinn

Day trips from Tallinn, what is left of the Soviet Union

Many of the things to see around Tallinn have to do with the recent history of occupation by the Soviet Union, which remains one of the main attractions of the country, at least in our opinion. We list the most famous below:

Paldiski is a town about 45 kilometers from Tallinn, accessible by bus, train, or bicycle. The train journey takes about 1 hour and costs € 2.80. After the Soviet occupation, it became the main training base for the USSR nuclear submarines. The city was first evacuated and then isolated from the outside world.

Today there are about 4,000 people living there and a redevelopment project is underway. From here, ferries depart for Sweden, Finland, and Germany. It is an interesting visit from the historical point of view and if you are fascinated by this type of Soviet ghost town.

Here the film Lilya 4-Ever was filmed.

The most famous Soviet ghost town in Estonia is located a little before Narva, towards the border with Russia.

It was a mining town built in Stalinist style in the 1950s and when Estonia was again independent, it cut off its water and electricity supply. The few remaining residents, Russians, escaped elsewhere and since then the city is in a state of neglect.

Near the homonymous village, to the west of Tallinn, is this underwater prison with an adjoining labor camp in the limestone quarry. It is still used during the summer by people going to bathe.

Close to the Lahemaa National Park, this is certainly one of the most visited attractions around Tallinn. It was built as a station for the demagnetization of submarines, so as to make them invisible to radar.

This was also a military area forbidden to Estonian civilians and they do not have much information but it is a very particular and fascinating place.

Want to travel the whole of Estonia deeply, read our guide and suggested itineraries
And why not take a ferry from Tallinn to Helsinki, Finland
Here our guide about cycling in Finland with itineraries and tips

Did you find it useful? Do you have more information or advice on Estonia and Tallinn?